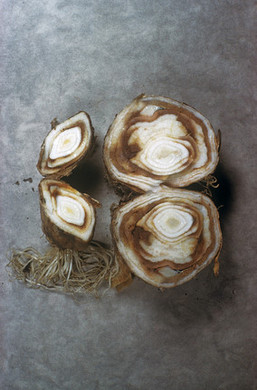 THE UNSPOKEN UNSPEAKABLE
By George Wilson

As a species we humans have developed coping strategies to deal with situations that may cause us pain or mental discomfort.  We have created acceptable ways to talk about the most distressing things without actually naming them, hence we speak of people ‘Passing away’, ‘Passing on’ or ‘Going to a better place’ when we actually mean they have died.  Such is our reluctance to speak of ‘The unspeakable’ that we even invent acceptable terms for dread diseases such as cancer which by using the special code becomes ‘The big C’ and even though everyone instantly recognises we are speaking of cancer no one has actually  used the word.  Within the confines of the daffodil world this reticence appears when the dreaded Eel Worm topic rears it’s ugly head, in a stage whisper it will be revealed that someone has problems with ‘Wrigglys’ ‘or that someone has ‘Problems’ and everyone makes suitably sympathetic noises and makes a mental note not to go visiting the host of the infestation.

Needless to say this reticence regarding visits depends upon the affected daffodil grower admitting to the unwelcome incursion of Ditylenchus dipsaci and this to many people is anathema.  Some will try to convince themselves that their losses are due to fly damage or if they dig up a bulb and look at the internal damage they put it down to neck rot or any cause rather than getting the bulb examined under a microscope. This inevitably leads to delayed punitive action against the invaders with subsequent further losses.  Others will recognise the problem and take action to limit the spread but like the old B.O. advertisement even their best friend isn’t told.
Well unfortunately I recently fell partly into the first category but I make no secret of the fact I have just discovered I have problems with eel worm.  A few seasons back I planted the second half of my longest daffodil bed with entirely new stock and in the first flowering season I noted a few ‘misses’ among the rows just about one third along the new planting.  This I put down to the change in conditions the bulbs had faced in being transferred to their new surroundings and I didn’t even dig up a bulb to investigate.  After all it was the middle of the show season and I was too focused on show preparation/flower selection etc.  This inaction has become one of the regrets of my daffodil life and in all honesty I probably deserved the outcome.  The next flowering season the centre section of the bed was a sea of devastation and here there is something that still puzzles me.  All the accepted knowledge surrounding this pest indicates that it spreads approximately one metre per year and is aided in it’s travels by the water movement within the ground.  In my case the bed in question has a slight incline and I would have expected the advance to be in this direction.  Imagine my horror to find that the spread was well in excess of a metre in the downward direction and at least an equal amount in the opposite direction.  In all, thirteen rows had bulbs that were directly affected which allowing two hundred millimetre row spacing adds up to around two and a half metres.
So, having investigated the cause and got over my initial shock what steps were to be taken to minimise damage and attempt to avoid future problems?  The bed in question has flagstones on one side and a grass covered path along the other side so at the outset I decided I would operate from the flagged side only, in this way I felt I could attempt to control surface hygene and limit the possibility of further spreading the pest.   Needless to say all bulbs from the affected area were to be bagged after digging and diagnosis and disposed of by burning.  Fortunately I have a source for obtaining reasonable quantities of formaldehyde and all digging equipment and my wellies were immersed in a strong solution of this chemical.  In addition the flagged path was brushed after bulb lifting to return the light scatter of soil into the bed and then the path was soaked with more formaldehyde solution, the brush also got treated in the same solution.   I lifted all the bulbs in the very obviously affected area and a further four rows beyond the apparent limits of the problem.  So in total I lifted and destroyed twenty one rows of bulbs with an average of seven bulbs per row in total around 150 bulbs or to put it in it’s worst terms in the order of £750, allowing a nominal £5 per bulb.  As I said earlier my initial inaction is the biggest regret of my daffodil growing life!  The remainder of the bulbs in the apparently unaffected area were lifted with great care, washed immediately and soaked in a solution of formalin and fungicide.  They were then dried in the normal manner on ventilated storage racks, put into net bags and then given the maximum hot water treatment.
Once the plot was cleared decisions had to be taken regarding suitable soil treatment as a first step in containing the infestation.  As I grow my daffodils in an allotment I am always conscious of the fact that other allotment holders are growing vegetables nearby (as I do myself) and that anything that persists in the soil and may leach into food growing areas should be avoided as much as possible.  According to the available literature and the information on the Internet, soil sterilising agents containing Dazomet become inert once the gas producing phase is over and I decided this was the first course of action to be taken.  The most readily available commercial form of this chemical  is Basamid and in due course I prepared the plot and rotavated the granules into the soil using the maximum quantity per metre for my soil type.  I opted to cover the treated soil with Polythene rather than ‘puddling’ it with water as the weather was unusually dry and I had to raise the moisture level in the plot prior to treatment.  Needless to say I took all safety precautions regarding clothing and using a face mask during both the treatment and during the covering of the plot.  Once again the path and all equipment got treated with formaldehyde solution.

I have absolutely no allusions that I have eradicated the pest and I realise fully that this is only the start of a long battle to keep this bed in isolation and to keep on top of the problem as much as possible.  I currently operate a ‘three year down’ system and this will have to change in order to introduce a more frequent soil treatment regime that may in time overcome the problem.  In addition I will cut down on the number of daffodil beds I currently plant and eventually I hope to be able to leave the affected bed fallow for a couple of years as this appears to be the most effective way of dealing with the problem.  Currently I have just completed planting into the treated bed and when the bulbs have developed roots and are taking in nourishment I will deploy another of the available remedies.  ‘Temek’ contains the chemical Aldicarb which has an effective soil life of around six weeks and this may destroy a few of the stragglers that evaded the Basamid.  I have some reservations about using this particular treatment as there is anecdotal and scientific evidence that it may persist and cause harm to wildlife, I am therefore looking for alternatives.
One thing this unhappy experience has taught me is why it is so hard to speak of the unspeakable.  The sense of horror that I felt on cutting open a few bulbs and the vain hope that I held before microscopic examination confirmed my fears is still a raw feeling within me.  At one stage early on in the proceedings I even considered giving up growing Daffodils such was the slough of despond that I entered, and as I have explained above I know there is a long battle ahead and there is no guarantee of victory at any stage.  It is really easy to become almost paranoid in this situation, visiting a fellow daffodil grower recently I found myself going through a checklist to ensure that I wasn’t wearing anything I had worn at the allotment the previous day.  For the first time ever I won’t be giving my spare bulbs for auction within the group and anything I buy will be quarantined in pots until it gains a clean bill of health.  If someone had told me many years ago before I started growing daffodils that a microscopic nematode would have caused me so much anguish and hassle I wouldn’t have believed them.  As I was writing this sorrowful tale I was reminded of the ’Ode’ that was reproduced in the 2010 Newsletter and in anticipating what is ahead I can do no better than to quote the last six lines.

However clever, up-to-date or smart you want to be,
Using formalin or Temik - or even HWT.
I’ve met them all a thousand times and suffered deadly loss,
But I’m a virile sexy thing - with a wooly defensive floss
From which my kind, in better times will emerge and find your daffs.
And as the round begins again we’ll have second - and last laughs!
Powered by